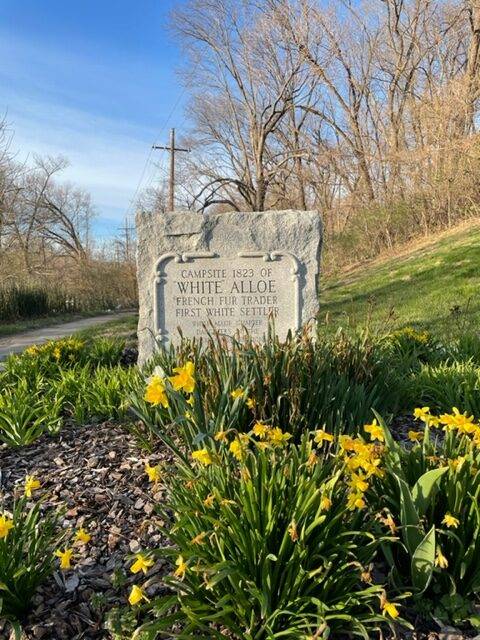 Nestled along the Missouri River on the Lewis and Clark Trail lies Parkville, Missouri, home of White Alloe Chapter, National Society Daughters of the American Revolution (DAR or NSDAR).

Our chapter name is derived from the first white settler in the area, a French-Canadian trapper named Pierre Alloe. More than a century ago he spent his winters in a cave, or “dugout,” on the bank of a branch emptying into the Missouri River at Parkville. The Detroit Indians, living across the Missouri River, called him “White Alloe” and gave the name White Alloe Creek to the small stream where he lived.

A monument, donated by the White Alloe Chapter, NSDAR, marks this location on the campus of Park University. Across Missouri Highway 9 from this marker is the old Parkville Train Station Museum, which is adjacent to the Parkville Spirit Fountain. The bench on the east side of the fountain was donated by White Alloe Chapter, NSDAR. A second bench sits by the McCoy Meeting’ House, Park University, where our fiftieth anniversary was celebrated in 2007.

Do You Have a Revolutionary War Patriot Ancestor?

Let us help you find your Patriot ancestor and become a member of the National Society Daughters of the American Revolution and the White Alloe Chapter, NSDAR. Whether you are just starting out to trace your family tree or are the family genealogist, assistance is available to help you gather the required documentation and guide you through the application process.

We would also like to extend a warm welcome for you to join us at one of our chapter meetings to learn more about DAR, our chapter, and how to become a member. We look forward to meeting you!

Let us help you find your Patriot ancestor and become a member of the National Society Daughters of the American Revolution and the White Alloe Chapter, NSDAR.

Contact us Today!
Let us help you on the path to membership!